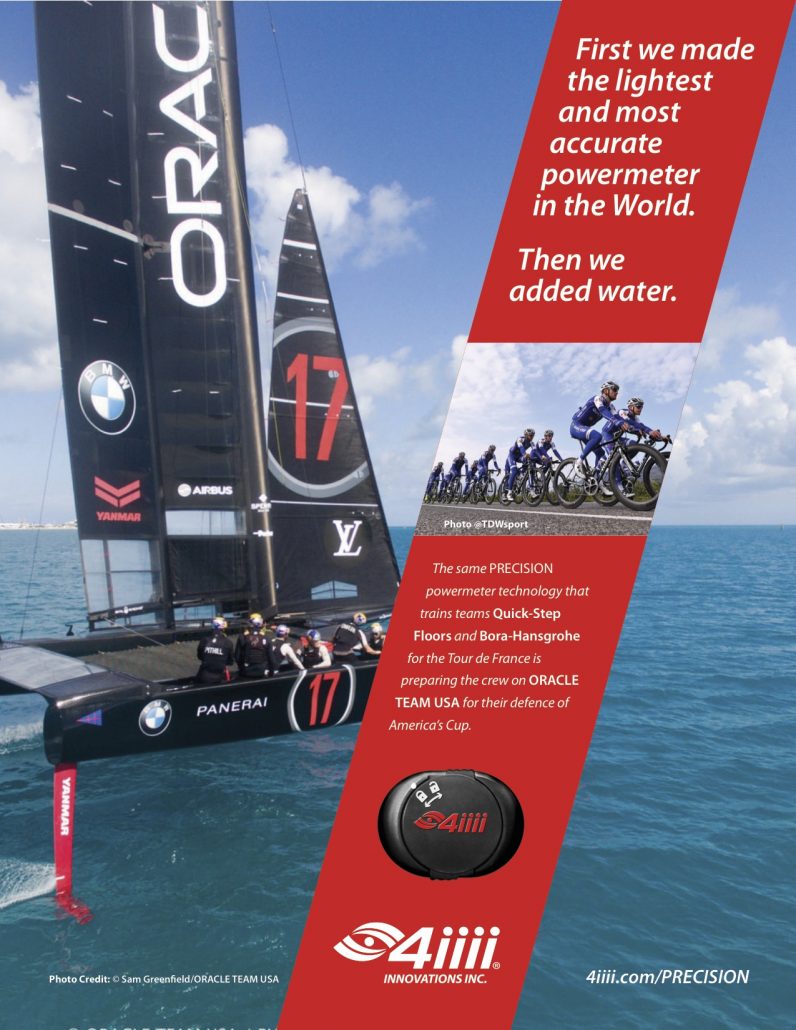 4iiii Innovations, a Cochrane, Alberta Company, will be aboard ORACLE TEAM USA’s hydro-foiling catamaran when the sleek carbon fiber vessel takes to the waters off Bermuda in the summer of 2017 to defend its victory against New Zealand in 2013.

4iiii CEO Kip Fyfe comments that “we’re proud to be providing PRECISION powermeter technology to monitor the ‘grinders’ who operate the winches on the wingsailed cat. PRECISION is not only the most accurate and lightest powermeter in the world, it’s also completely waterproof. Our proprietary technology, together with the expertise of an inspired 4iiii team, has made the adaptation from land to water possible.

The 4iiii Innovations PRECISION powermeter measures power output and energy in watts. The device is an adaptation of the technology that has made the Company the dominant powermeter on the World Cycling Tour and the choice of Tour de France Quick-Step Floors Cycling Team and BORA – hansgrohe. PRECISION is not only the most accurate and lightest powermeter in the world, it’s also completely waterproof.

ORACLE TEAM USA Skipper Jimmy Spithill notes that that “aside from the wind, all the energy
used to power the hydraulic systems and sail the boat is human generated. The team with the highest output will have a big advantage – and maximizing human power output starts with accurate monitoring.” Ian Burns –Director of Performance for ORACLE TEAM USA adds that “we’ve made substantial gains in power output from our team – in the order of 20% in 3 months and this is mainly due to knowing exactly how the guys work now and optimizing their individual training programs.”

The 34th America’s Cup recorded one of the most remarkable comebacks in sports history, as ORACLE TEAM USA recovered from 8-1 losses to fight through to the final race and claim victory.