There’s no question: we all know that pushing harder on the pedals makes you go faster.  But, what are the effects of how you push?  It shouldn’t be a surprise that everyone has a slightly different physiology, which results in a different pedal stroke, which then changes the forces on the crank.  To further complicate things, the way you push on the pedals differs between an easy recovery pace and a full-on, no-holds-barred sprint to the line.  You don’t want to sacrifice the accuracy of those numbers, especially when it could be the difference between breaking that big power number you’ve been chasing after! The real question should be: how does a 4iiii powermeter measure those forces accurately for every rider and every pedal stroke?

When calculating power, we’re relying on one very important feature.  Strain.  Strain is a measure of how much physical deformation is present in a component, which is often directly proportional to the force applied, even if it’s far too small to actually see.  These are measured with tiny gauges that stretch with the material and tell us exactly how it’s moving, but each gauge only tells us one direction of movement.  This is how your bathroom scale tells you how much you weigh (even if you disagree with its assessment), but it’s also how the scales that measure the weight of fully loaded trucks on the highway work.  Without delving too deep into the science, there are a few different types of forces that we’re actually interested in measuring.  The most common and most significant force is the bending strain. Every crank based powermeter on the market measures bending.

We didn’t stop there though.  In order to get the highest accuracy, we kept measuring, since knowledge is power! (and power is what we’re interested in, actually!).  If you imagine holding the brakes on your bike and standing on the pedal, you’re not only going to cause a bending of the crank, but also a twisting motion.  This is exactly the force that a driveshaft in a car has to sustain.  It’s not the primary loading of the crank, but it’s much more than nothing.

Now, this is where the competition stops, but we kept going!  In order to become the most accurate powermeter on the market, we went even further, and patented our triaxial strain gauge technology to resolve the other major force acting on the crank, axial loading.  This is more or less stretching the crank to make it longer or shorter.

Why did we go to this length to measure all of these forces when others don’t? The easy answer is that we’re engineering geeks and appreciate capturing all of the available detail, but in reality, the real answer is that we’re cyclists too, and all we want is the most accurate measurement possible.  Using these three components gives us the best possible picture of what’s actually happening in the crank, and exactly how much power you’re making.  And don’t think that it’s just the elite cyclists that benefit from this, regular riders will benefit from this measurement as well!

In reality, a simulation of the crank shows the forces and strains in action: 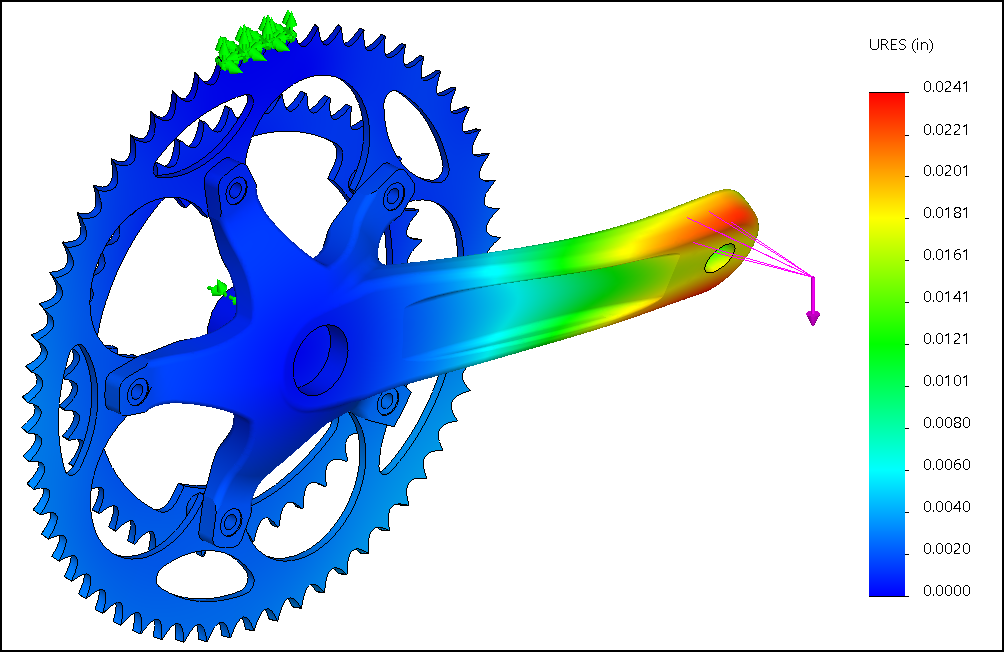 Not to worry though, unless you’re maybe Peter Sagan, your crank doesn’t deform this much (we amplified the movement by about 200x so that you can see it), but it gives you an idea of just how complex the results can be.  Because we took the extra time to go to these extremes for measuring more forces than anyone else, you can be sure that your next sprint AND your next recovery ride will both be measured with the highest level of accuracy in the industry, with less than 1% error, and that yes, you really can be confident in your brag about that latest #WattBomb.

A Summer Without Racing – Creating the Ultimate Fondo
Scroll to top