Let’s face it: when you buy a powermeter, you buy it because you want to know your exact power. You don’t want to know “I might have set a new FTP today”, or “I approximately had my best workout”. Accuracy is everything, but what does accuracy actually mean?

First off, let’s start with the definition of power. Power is the mechanical energy generated or dissipated by a system. In general, power is calculated as a force multiplied by a velocity (F x V). Similarly for rotating devices, this is equated to torque (𝛕) multiplied by angular velocity (𝛚) or (𝛕 x 𝛚). A rider turning their power meter will generate a torque on the pedals (turning force) and will rotate at some angular velocity (say, 80rpm). By calculating both of these values, we can now calculate the power generated at the crank by the rider.

Put simpler: the faster you turn your pedals or the harder you push, the more power you generate.

But we don’t turn the crank evenly! No matter how smooth you are, there are pushes, and jabs, and most importantly, every rider is different and no machine can replicate this. So, companies that test with a machine that spins the cranks at a constant torque aren’t testing for accuracy in the way a real cyclist actually pedals. 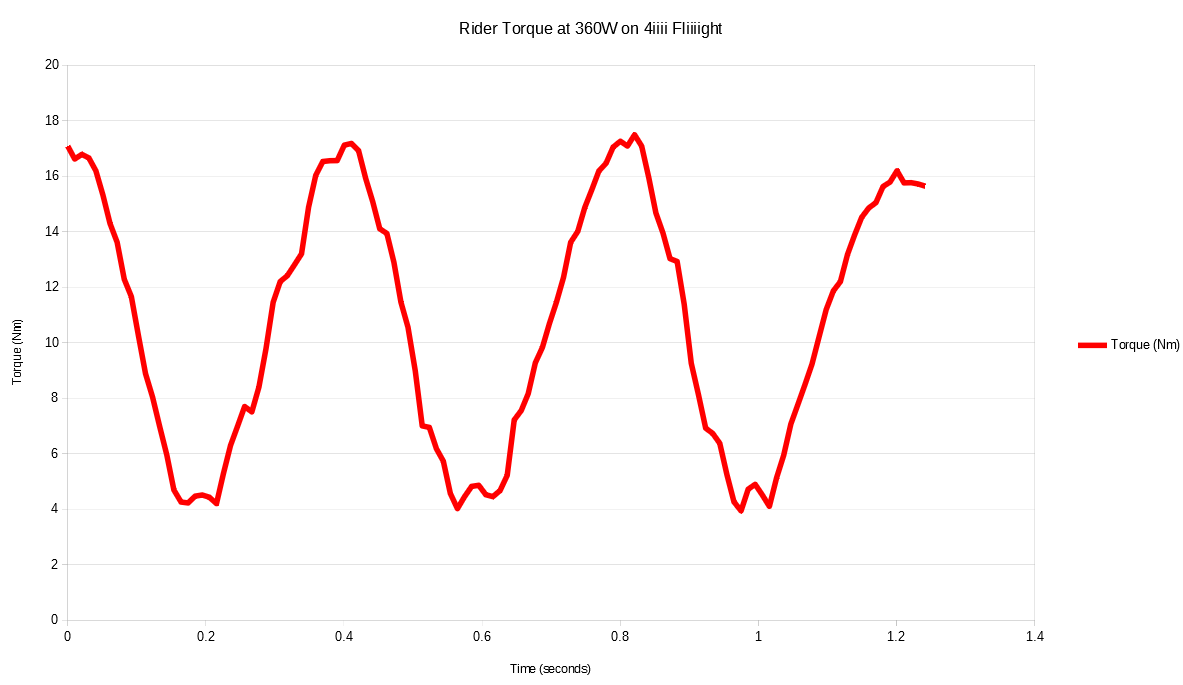 Instantaneous torque data from 3 pedal strokes on a 4iiii Fliiiight Smart Trainer. Note that the rider goes from a minimum of 4Nm to nearly 18Nm – that’s a 4x swing in torque every pedal stroke!

How to Measure Power

In a perfect world, everything is 100% efficient, and it would be very easy to measure power output. Unfortunately, thermodynamics is a harsh mistress, and we lose a bit of power with material flex (hysteresis losses), chain and drivetrain (bearing and chain friction), tire losses (rolling resistance), etc. Anything that generates heat or noise is a form of lost power.

This is important because it becomes very difficult to establish an accurate testing protocol to make sure that what we (or anyone) claims is actually accurate. Accuracy is really just a measure of how close we are measuring when compared to a real value, but how do we even measure that “real value”? You have to go much further than just putting a few different powermeters on a bike and comparing results. All that would accomplish is that the different options are precise and not accurate, since there is no real baseline measurements.

Historically, measuring accuracy has been done with a dynamometer (no, this has nothing to do with Jurassic Park) which accurately measures torque and speed. These devices have been used for years in the automotive industry, but are generally not well suited for the torque input variations that even the smoothest rider provides. Besides, even the automotive industry has a history of “cheating” and manipulating results in their favour.

How to Measure Cycling Power Accurately

Instead, we went to Prof. Dr. Rodger Kram, professor of Integrative Physiology and manager of the Locomotion Lab, University of Colorado, for a ground-up, physics based measurement approach. Dr. Kram and his team have developed a simple, but very accurate method of measuring the actual power getting to the ground with a given rider. By running a treadmill at a very accurate speed and inclination, and by measuring and eliminating variables such as rolling resistance and drivetrain efficiency, he is able to measure the power output with unprecedented accuracy. Another major advantage of this laboratory test protocol is that it takes out a lot of the variability for test conditions, like wind, temperature, and even allows us to test against a variety of different rider pedaling styles. He is even able to pre-cool or pre-heat the cranks to test the extremes of temperature. And let’s face it — would you want to be volun-told to maintain 350W in 50°C desert heat, or would you prefer to do it under controlled lab conditions?

An example of testing rolling resistance during the power measurement protocol

The whitepaper produced during this test, including accuracy results is available here: Boulder Whitepaper.

The testing was extremely encouraging. Our PRECISION Pro Powermeters were able to achieve less than 1.58% error, while the Podiiiium Powermeters were better than 1% error. These weren’t some “perfect” cranks that were chosen because of repeatability either — they were actually purchased by Dr. Kram’s lab from our website — our fulfilment team didn’t know they were going out for testing — which is the only way to guarantee that selection bias has been eliminated.

What does this mean to me?

So, at this stage, you might be saying, “I really appreciate the physics lesson, and now want to devote my spare time towards the pursuit of science (or maybe that’s just what I’m saying), but why does it really matter to me?”

The answer to that is that it’s a real world demonstration of accuracy. By testing at an independent university lab, we are confident that the results are accurate, unbiased and based on how real cyclists pedal, not machines. It’s also further proof that our 3D strain-gauge technology can capture the unique pedalling dynamics of real cyclists, instead of just a machine that spins the cranks at a constant torque all of the time.

You will be very hard pressed to find any other manufacturer publishing such transparent accuracy data, but for the sake of everyone we encourage them to step up for this benchmark testing at Dr. Kram’s University lab as well. In the meantime, we think you should buy the most accurate powermeter on the market!

4iiii PRECISION PRO Powermeters to be fitted as standard on new Caledonia-5... Lex Albrecht on Power & Progression
Scroll to top